The history of the various Dutch territories in the New World are closely related. Therefore, the end of the Dutch colony in Brazil (1630 – 1654) marks also the beginning of the arrival of the Jewish Dutch in New Amsterdam. But this too had some difficulties.

In 1624 the province of New Netherlands was founded on Noten Eylant, south of Manhattan. This island has been called Governors Island since 1784.
One year later fortress Amsterdam was built on the southern tip on Manhattan and this New Amsterdam was the centre of the trade in beaver fur.
There was already a Jewish settlement since 1636. The community of Shearith Israel (this community still exists today) founded a cemetery in the area that is now Chatham Square. This is the oldest Jewish cemetery in North America.
On the 2nd of February 1653 the town received city rights and the growth increased rapidly. New Amsterdam became the biggest Dutch colonial settlement in North America.
The territory remained Dutch until November 1674. The peace treaty of Westminster determined that the settlement was English from that point on.
The Jewish settlement in the new city had an important link with the arrival of Peter Stuyvesant. Stuyvesant came from the province of Friesland and worked as a commodore for the WIC (Dutch West Indies Company) at the Antilles. Stuyvesant was a law-abiding man and the first thing he did was solving disputes according to the law. He did not tolerate people rising up against governors, even if they had the moral right. In the end, and not because of a progressive attitude of Stuyvesant, a city council with burgomasters, aldermen and a sheriff was installed.

Refusal
New Amsterdam became a melting pot of cultures. British, Germans, French and Scandinavians lived there and the Dutch were the biggest minority.
The Dutch language was the lingua franca and official papers were written in Dutch.
Stuyvesant was a purist in his religion and he only allowed the Dutch Reformed Church (the Calvinistic Christian religion). However, Dutch law allowed freedom of religion.
In 1654 23 Jews arrived from the former colony in Brazil after the surrender of the colony to the Portuguese. They sailed on one of the 16 ships that departed from Brazil and wanted to sail back to Amsterdam. This ship sailed for the New Netherlands after an encounter with pirates near Jamaica.
Under the supervision of Abraham de Lucena and Salvador Dandrada they intended to buy land and that was refused by Stuyvesant because of “important reasons”. This group had almost no money left after the encounter with the pirates and could not pay fully for the passage. Stuyvesant auctioned the few remaining possessions but the money earned was not enough. Stuyvesant asked the WIC for permission to expel this group. This was denied, the WIC allowed this group in 1655 to live in the colony as long as they did not ask for financial aid at the WIC or the community. Stuyvesant was not amused. He ruled that Jews were not allowed to become members of the guard, and taxed the Jews for this guard. Abraham de Lucena, Salvador Dandrada, Jacob Barsimon and the rich merchant Jacob Levy put pressure on the Republic by means of a petition of the 5th of November 1655 and the Jewish community of Amsterdam assisted them. Stuyvesant capitulated and had to stop putting Jews on the backseat on social, economic and juridical areas. New Amsterdam granted freedom of religion to the Jews on the 20th of April 1657. This marks the beginning of the largest Jewish city in the world with a larger Jewish community than Tel Aviv. 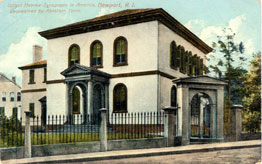 Asser Levy
Asser Levy wanted more than freedom of religion and leaving the Jewish population in peace. He wanted more, and by pressuring Stuyvesant he became the first Jew in North America that was allowed in the military, was allowed to work in trade, received permission to become a butcher and was allowed to own a house. He went into the fur trading and became one of the six butchers in the colony with a permit. Because of religious reasons he did not butcher hogs and he was not made to do so. He became one of the richest men in the colony. In 1671 Asser lend money to the Lutherans to build a church.

Further….
With the arrival of 23 Jewish refugees from Brazil the Jewish settlement in New Amsterdam became a fact. After that event all went quite rapidly. Around the year 1700 there are already 6 religious communities in North America with a synagogue. They are in Montreal, Philadelphia, New York, Newport, Savannah and Charleston.
Until 1720 the majority of the American Jews were Sephardic with a Spanish/Portuguese background. After 1720 most of the new Jewish immigrants came from central Europe, with England as a hub.
The biggest part of them worked in commercial activities, like a small shop, the clothing industry, distilling liquor or making soap.
The largest Jewish plantation owner was Francis Salvador, in South Carolina. Salvador grew the colour indigo. In 1755 Francis became the first Jewish politician in North America, as a member of the South Carolina Provincial Congress.
Religious communities were very important. Not only for the religion, but also for social aspects as medical care, education for children en help to new immigrants. These new immigrants, mostly Asjkenazic, adopted the Sefardic religious services.
Shearith Israel, the community that founded the cemetery in 1636, founds in 1730 the first synagogue on Mill Street in New York. This is the oldest synagogue on the mainland of North America and does not exist any more. In 1763 the Touro Synagogue was founded in Newport, which is the oldest synagogue still in existence.

source:
wikipedia,
jewishvituallibrary.org,
paperpen.com/heritage/350/chronology.htm,
with thanks to Eric and Ron for the corrections.